Virtue of Forgiveness Formation in Educational Programs to Promote Peace

The Rome Conference on Forgiveness took place on Thursday, January 18, 2018 at the University of Santa Croce, near the Piazza Navona.

You can view excerpts from the conference whenever you wish. The Videoltre film crew video-recorded the talks.  They are available to you below. Please click on the speaker’s name to access the video presentation.  At the end of the speakers’ list is a playlist option in which all of the videos are available in one place.

What is the focus of the conference?

This was a one-day conference in beautiful Roma. The program first focused on forgiveness education with children and adolescents. The next set of speakers discussed forgiveness from Judaism, Christianity, and Islam, examining what it means to forgive, the importance of forgiveness, and how to better interact with others through forgiveness.

Fr. Luis Navarro, Rector, Professor, University of Santa Croce, gives the opening remarks.  “The way to forgive is to love……It is an honor for us to have this conference here……It will be useful for us today…but also for the future.”

Fr. Robert Gahl, Professor of Philosophy, University of Santa Croce, introduces the entire set of talks for the afternoon.  “It is an exceptional occasion so that we can all go deeper in our understanding of forgiveness whether more from an academic perspective, or a personal, or spiritual, or diplomatic, or political.”

Alison Sutherland, Director-at-Large of the Rotarian Action Group for Peace informs us of some of the peace initiatives in which her groups are involved.

Peta Pellach of the Elijah Interfaith Institute in Jerusalem discusses forgiveness in Judaism.

Media Coverage of the Rome Conference on Forgiveness:

ROME – Scientific study of the world has been around for a while now, so it’s rare these days to meet the founder of an entirely new branch of science. That, however, is what you’ve got in full living color in the person of Robert Enright, a Catholic who teaches at the University of Wisconsin in Madison, and who pioneered what’s today known as “forgiveness science.” 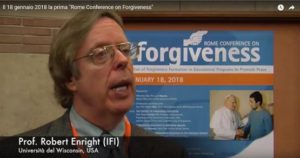 In essence, it’s a scientific attempt to answer two questions:

•  First, how does forgiveness actually work?

•  Second, what are the consequences of forgiving someone for the one who does the forgiving?

Enright has spent the last thirty-plus years developing hard, empirical answers, including a four-phase, twenty-step process to lead patients to forgive. He insists data prove it has positive effects, including tangible reductions in anxiety, anger and psychological depression, and gains in self-esteem and optimism about the future.

We extend heartfelt thanks to our Rome Conference partner Forgive4Peace.