Making a decision to go ahead and forgive is hard. Even when I try to “will” myself to forgive by saying over and over, I will forgive,” I have a hard time doing it. What can I do when I do not feel like forgiving so that I can make that important decision to go ahead?

Our research has shown that the most difficult step in the forgiveness process is this very issue, to simply start the process by making the decision to forgive.  So, please be aware that you are not alone in this.  I would also recommend that you look toward the finish line (but please do not be in a hurry to get there).  See down the track that there is emotional relief waiting for you.  If the one who hurt you is willing, there may be reconciliation waiting for you. As you reflect on these benefits, you may be more willing to start the process.  And do not forget to bring along the virtue of courage, which also will help you start. 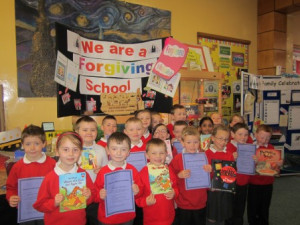 We came across this expression recently while browsing the web.  The author wanted to make a point about the forgiver’s well-being by encouraging forgiveness…..of a situation.

Can a person forgive a situation?  No.  That is not possible.  Why?  Forgiveness is a moral virtue (as are justice, patience, and kindness as examples).  All moral virtues are toward other people or living beings (we can be compassionate to a wounded dog, for example).  Moral virtues do not point toward storms or earthquakes.  Why is that?  The purpose of moral virtues is to serve, to make better, to uplift in goodness.  We do not serve thunderstorms or try to make earthquakes morally better.  We do not uplift a dying tree in moral goodness either.

The Forgiveness Trap: Becoming Stuck in the Hope of Reconciliation

When we properly understand what it means to forgive someone, much of the criticism leveled against forgiveness vanishes. For example, if someone thinks that forgiveness is to find an excuse for an offender’s unfair behavior, we have to correct that misconception. We have to realize that when we forgive we never distort reality by falsely claiming that the injustice was not an injustice. As another example, if someone thinks that, upon forgiving, the forgiver has an obligation to reconcile, we need to understand that the moral virtue of forgiveness is distinct from reconciling (in which two or more people come together again in mutual trust).

Yet, what of this situation: Suppose that Alice forgives Allen, her boss, for several inappropriate advances at work. He is not remorseful, does not intend to change, and dismisses her concerns. Suppose further that in forgiving, Alice sees the inherent worth of Allen, concluding that he is a person worthy of respect, not because of what he did, but in spite of this. Seeing Allen’s inherent worth motivates Alice to stay in this particular job and wait in the hope that Allen will change. After all, if he has inherent worth, then he may be capable of altering his unwanted behavior.

Of course, none of us can look into the future with certainty. No one knows for sure that Allen will not change. Perhaps he will have insight into his inappropriate behavior, have remorse, repent, and ask for a genuine reconciliation with Alice.

How long should she wait? How do we know, given that we cannot predict Allen’s future behavior? A key, I think, is Allen’s current insights into his actions. Does he see them as highly inappropriate or as an “I cannot help myself” story? Does he see the behavior or continually rationalize it?

Does Allen show any remorse at all? Has he made even the slightest overture to repent? Does he have any insight whatsoever into his inappropriateness? If the answers are “no,” “no,” and “no,” then Alice’s waiting in the hope of reconciliation may not be wise if she has given this sufficient time.

When we forgive, we have to realize that sometimes our offenders choose to be willfully ignorant of their injustices and to the damage it is doing. When we forgive, we have to realize that some of our offenders choose not to change at all. Under these circumstances, we should not let our forgiveness set up a false hope. If we do, we are distorting the power of forgiveness and need to re-think our position. Forgiveness is not so powerful that it can always get the other to develop remorse, to repent, and to reconcile well.

Here is a brief excerpt from yet another article that features the forgiveness research and philosophy of Dr. Robert Enright, founder of the International Forgiveness Institute. “The Power of Forgiveness” was written by Steven Pomeroy, assistant editor for Real Clear Science, a science news aggregator. This article appeared on August 27, 2013 on BIG THINK–a New York City-based website that bills itself as “a knowledge forum.” The website was voted Time Magazine’s #1 Website for News and Info in 2011.

For most Americans, the Amish way of forgiveness is difficult to comprehend. It’s sourced deeply within their way of life, which is grounded in compassionate, unyielding faith.

“Rather than using religion to bless and legitimize revenge, the Amish believe that God smiles on acts of grace that open doors for reconciliation,” Donald B. Kraybill, a distinguished professor at Elizabethtown College explained in 2007.

But forgiveness is not only grounded in faith, but also in science. In 1996, University of Wisconsin educational psychologist Dr. Robert Enright developed a process model of forgiveness. It can be broken down into four phases: uncovering anger, deciding to forgive, working on forgiveness, and discovery and release from emotional pain.

Dr. Enright tried out his forgiveness training on 12 female incest survivors. Six of the women served as an experimental group, and immediately received Enright’s intervention, which was delivered in a set number of sessions spread over 14 months. The remaining women — serving as controls — were wait-listed and received the intervention only when their counterparts finished.

The results were glowing. Members of the experimental group became significantly more hopeful, and their levels of anxiety and depression decreased dramatically. Fifteen years later, the benefits remained.

A popular view in American society is that forgiveness is weakness. But the conducted science clearly contradicts that pervasive view. Forgiveness makes you stronger.

“[Forgiveness] does not make you weak,” Dr. Enright affirmed to OnWisconsin. “The love you cultivate and develop in your heart is stronger than any injustices anyone can ever throw against you. And once you live that, you realize how very, very strong you can be, because that’s a buffer against all of the poison that unfortunately visits us just by being alive.”