Our team at the International Forgiveness Institute, after much thought and discussion, centered on Belfast, Northern Ireland for four reasons: 1) There had been The Troubles across Northern Ireland, in which Irish Catholics and British Protestants were in an escalated conflict since 1972’s Bloody Sunday in Derry/Londonderry; 2) there was a signed peace accord in 1998, which reduced the conflict, but still there was a post-conflict sense of tension; 3) the two groups were English-speaking and so we would not have to start with interpreters; and 4) Ireland and Northern Ireland are two of the closest ports-of-call from the Eastern United States.

Upon my first visit to the principal of St. Vincent de Paul School, Mr. Brian McParland, he heard our proposal for forgiveness education and agreed that this is a vital vision for Northern Ireland.  He assented to having this programme pioneered in his school.  Yet, he quickly added this: “You will not last more than 3 years here in Belfast.”  I was surprised to hear that and asked, “Brian, why do you say that?”  He looked at me and said, “No one lasts more than 3 years in Belfast.  After that time, people grow weary, the thrill of travel wears off and they quit.”  I took a deep breath and answered, “Brian, I will give you 20 years.”  He looked at me with kindness, but said nothing. 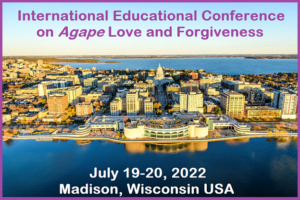 I have a problem with my partner.  He does not see that he has hurt me, despite my best efforts.  I now am wondering if reconciliation is even possible.  What I mean is that he keeps hurting me and doesn’t even see it.

This is a difficult situation because you now have a lack of trust that he can change.  I recommend that you first forgive him and from that softened-heart position, approach him at an opportune time and have this kind of a conversation with him: First, you could let him know that you suspect that he is practicing the psychological defense of denial, in that he possibly is afraid to see the truth of his hurtful actions.  Second, if he begins to see that he indeed is using the defense of denial, you then can let him know the extent of your hurt, for example, on a 1-to-10 scale with 10 being an enormous amount of hurt.  Third, if he sees this hurt and sees it as caused by his actions, the next step is to work with him on a plan to deliberately change the behavior that is causing the hurt.  Please keep in mind that even if all three strategies work, it still will take some time for you to build up trust because this tends to develop slowly after a pattern of injustices that cause hurt.  Your continuing to forgive may increase your patience with the trust process.

“Kindness” is not an exact enough word in the context of a person treating you unfairly.  I say that because you can be kind without this issue of injustice entering into the situation.  For example, you can be kind to a three-year-old who offers you her toy.  She did nothing wrong to you.  In the case of forgiveness, yes you can be kind, but you also can be loving and it always, without exception, occurs when someone was unfair to you.  That is the specific difference between kindness and forgiveness.  The latter always is in the context of being treated unfairly whereas kindness can occur when the other has been treating you kindly.

I hear a popular expression these days that is called “ghosting.”  I am not exactly sure what that means, but I suspect it refers to someone who is just not there for you.  I have such an issue now with a partner, who is quickly acting as if he wants to be my ex-partner.  Can you help me understand this issue of “ghosting”?

Yes, as is the case with a recent question to me about the family as a forgiving community, I have written an essay at the Psychology Today website on the issue of ghosting and forgiveness here: