A Mother’s Journey of Hope and Forgiveness

NBC Bay Area – KNTV, San Francisco, CA – Scarlett Lewis lost her six-year-old son Jesse during the Sandy Hook school shooting. In the face of that tragedy, Lewis said she learned to forgive the shooter, in part due to the final message Jesse wrote on their kitchen chalkboard: the words “nurturing,” “healing” and “love.”

Lewis is sharing the story of her son’s final act of bravery as  well as how she learned forgiveness in a book, “Nurturing    Healing Love: A Mother’s Journey of Hope & Forgiveness.” Jesse Lewis had urged his classmates to flee the school after seeing his teacher shot, investigators learned after gathering accounts from survivors. Six children escaped before 20-year-old Adam Lanza reloaded and shot Jesse.

“I knew that forgiveness was possible… It’s taking your power back. Not forgiving doesn’t feel good,” Lewis said.

Lewis’ book isn’t a story about a massacre. It’s a story about love and survival. It’s about how to face the impossible, how to find courage when you think you have none, and how to choose love instead of anger, fear, or hatred.

“I believe that Jesse was put on this earth to do what he  did… I’m proud of him. I

believe he left a message for me: nurturing,  healing, love.” Lewis added. “We understand these final words as a calling from Jesse that says, ‘I have something for you to do for us. That’s to consciously change an angry thought into a loving one’ because it is a choice.”

In addition to the book, Scarlett recently began the Jesse Lewis Choose Love Foundation, which promotes ways for communities  to “choose love over anger, gratitude over entitlement, and forgiveness  and compassion over bitterness.”

When you begin to do the work of forgiveness, you should realize that you are practicing a moral virtue.  As Aristotle reminded us 2,350 years ago, to grow in any moral virtue takes effort and is a struggle.  So, please be prepared for some hard work as you proceed.

At the same time, it is important that you not drive at this without rest.  Suppose you are starting an exercise program.  You would not want to put such effort into this that you are spending 8 hours a day, neglecting other aspects of your life.

What you need is balance (or the virtue of temperance).  Yes, work at forgiving and give it your attention, time, and energy.  And yes, rest and refresh.  This latter point is too little emphasized in high-achievement cultures.

Try to enjoy the journey and please do so in such a way that the forgiveness journey itself does not exhaust you, but instead eventually refreshes you.

Your Unfolding Love Story for 2014 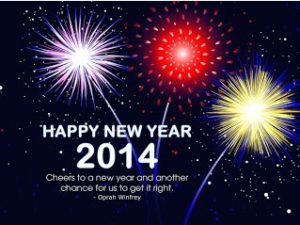 We have reached a new year. Let us gently move forward one year from now to January 1, 2015. Let us do a mental exercise and pretend that 2014 is now over—gone forever. What you have said and done has now gone out to others for good or for ill. Regrets? Guilt? Remorse? These could be part of the package as you reflect back on 2014 on the first day of 2015. How have you lived in 2014? What could you have done to make the world a more loving place?

Back to present-day January 2014…now is your chance to open the door of opportunity to this New Year. An opportunity to fulfill your January 1st, 2015 hopes and dreams that you just reflected on—to make them whole, peaceful, joyous and a reality. Despite the unforeseen trials and hardships, regardless of others’ injustices and unfairness, you have the power to make the year 2014 a triumph of love worth remembering and celebrating next January 1st of 2015.

You are not the master of your fate in that you can prevent the unwanted. You, however, do have a strong influence on all of this if you make a commitment with me now to love. 2014 will be the year that you grow in love, give love to others, give love to those whom you do not think necessarily deserve it. The kind of love connected to forgiveness is that which serves–out of concern for the other. You have within you now the capacity to give this love freely, without cost, without anyone earning it. Go ahead, try it.      Give love away as your legacy of 2014.

How can you start? I recommend starting by looking backward at one incident of 2013. Please think of one incident with one person in which you were loved unconditionally, perhaps even surprised by a partner or a parent or a caring colleague. Think of your reaction when you felt love coming from the other and you felt love in your heart and the other saw it in your eyes. What was said? How were you affirmed for whom you are, not necessarily for something you did? What was the other’s heart like, and yours?

This kind of love will not necessarily be a two-way street in 2014. You may have to extend the love through forgiveness, a hard but joyous road. Forgiveness is part of your unfolding love story. Forgiveness, which serves the other through compassion and gentleness, is not always reciprocated.

Yet, one thing is certain: When others reflect upon 2014 in early January, 2015, they will remember your kindness, your unconditional love, your forgiveness. They will see who you really are. And as for you? Well, you will have added a chapter to your unfolding love story. How do you think that will feel?

Welcome to 2014. The International Forgiveness Institute is here to support you as you add a new chapter to your book of life.