Editor’s Note: Robert Enright, co-founder of the International Forgiveness Institute, just returned from a trip to the treacherous Middle East to promote Forgiveness Education. Here is his report:

After three grueling years of trying to break into the Middle East with forgiveness education, we have finally succeeded.

We are now in the Mar Elias Educational Institutions (MEEI) in Ibillin, Israel, about 12  miles from Nazareth and 20 miles from the Lebanon border (view map). 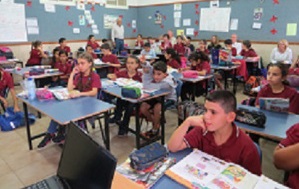 The Mar Elias Schools were started over 30 years ago for integrated education between Arab Christian and Muslim students. The ethos of the school is respect, tolerance, and compassion. About 55% of the families in this region are below the poverty level. The founder of these schools, Elias Chacour, is a three-time Nobel Peace Prize nominee.

The head principal, who runs the high school, is ready to implement forgiveness education this fall in grades 5 through 12 (similar grading system to US schools). The English teachers will provide the instruction.

In the meantime, we will be busy translating the teacher curriculum guides for grades 1-4 into Arabic so we can implement the forgiveness program with these grades in the 2015-2016 school year. Pre-kindergarten and kindergarten programs are still under discussion. There are no English courses from pre-kindergarten through grade 4 so all of the instruction will be in Arabic.

In the 2014-2015 academic year, we will conduct Skype sessions focused on forgiveness education with the 11th and 12th grade Israeli students communicating with Edgewood High School students in Madison and students in Monrovia, Liberia, Africa.

I will return to the Mar Elias schools in January, 2015 to continue discussions with the principals who are anxious to expand forgiveness education in the coming years.

By the way, the first floor of the Mar Elias High School is a bomb shelter—required by the Israeli government. There are thick metal casings around the windows and heavily reinforced concrete. Can you imagine attending a school with a mandated bomb shelter in it?

Footnote: During his time in Israel, Dr. Enright was accompanied by Rev. Joan Deming, Executive Director of Pilgrims of Ibillin, a US not-for-profit organization that strategically and financially supports the Mar Elias Educational Institutions. Rev. Deming helped open doors at the MEEI by introducing Dr. Enright to principals and administrators. When not in Israel, Rev. Deming resides in Madison.

Toward Forgiveness Education: A Thought Experiment for You

Picture a wide-eyed, innocent 6-year-old child. She is full of life and expectation for her future. When age 21, she

The Washington Post, Washington, DC. – As Israelis and Palestinians once again trade rocket attacks in a new round of violence, a 10-year-old story is back in the news because of the ability of one of those involved to grasp the awesome power of forgiveness and reconciliation.

On Feb. 18, 2004, a week after his 15th birthday, Yousef Bashir was shot in the back by an Israeli soldier in the front yard of Bashir’s home. The bullet splintered into three fragments, severing nerves near the teenager’s spine.

Today, after months of rehabilitation in an Israeli hospital where he learned to walk again, Bashir describes the episode as “life-changing,” which makes sense, and “a blessing,” which to many is astonishing.

“I feel very thankful to this horrible experience because it spared me from a lot of hatred I would be growing up with toward the Israelis,” he says. “I was shot by one Israeli but saved by many Israeli people.”

Indeed, over the years, Bashir has imagined finding the soldier who shot him that afternoon.

“I forgive the soldier,” he said. “It would be a great privilege for me to meet with the solider. . . . What he did changed my life a great deal, I would say positively more than negatively. But I think it would be life-changing for him if he gets to see me.”

During his recovery, Bashir found his way to the United States with the Seeds of Peace program that links Palestinian, Israeli and American teenagers; attended boarding school in Utah; then college at Northeastern University in Boston, MA.

Now 25, he is studying for his master’s degree in peace, conflict and coexistence at Brandeis University just outside Boston, where students and faculty come from 60 countries on six continents. It is also the only nonsectarian Jewish-sponsored college or university in the United States.

As The Washington Post columnist Ruth Marcus wrote, “I am too realistic — too cynical, perhaps — to think that Yousef’s experience is scalable; anger tends to trump forgiveness. But as rockets fly and parents mourn, as decades of enmity flare anew, his example offers a lesson, both humbling and inspirational, in the all-too-scarce art of reconciliation.”

Read the full column: “Spared from hatred, thanks to a bullet in the back.”

Anger Is at the Heart of War

In today’s news, we read that Israel and Hamas are on the brink of all-out-war. In Belfast, Northern Ireland, today one group is verbally

threatening violence because a parade commission banned them from a particular parade route. Anger. Toxic anger. It is at the heart of war. Yes, there are land disputes and ethnic disputes adding to the war and threat of violence, but disputes can be handled without violence…..if the hearts are without toxic anger. Our science shows this: forgiveness education reduces toxic anger. We need forgiveness education…..now….so that future generations can be protected from angry hearts in those who hold power. Maybe they will use their power more wisely when schooled in forgiveness.

My mother has been diagnosed with a mental illness, Borderline Personality Disorder. She is constantly accusing me of stealing her money, which I have not done. I am getting exasperated. Can I actually forgive her? I ask because she probably is not giving full consent of her free will to these thoughts.

You raise an important point about whether or not we can forgive if there was no intention to harm.  I think it is appropriate to forgive in some cases even if there was no intention to harm.  Here is one example: Smith is not paying attention while driving and hits and seriously injures Jones.  Smith explains that he was distracted and did not mean it.  Yet, in this circumstance, given the dire consequences that can occur when someone is distracted while driving, this action (driving while distracted) is an injustice.  Therefore, Jones can go ahead with forgiveness even though there was no intent to harm.

In your mother’s case, she may not realize the depth of hurt she is causing you because of the Borderline Personality Disorder symptoms, but even so, a mother should not be treating her daughter with disrespect and in a consistently unjust way by stealing money repeatedly.  This is an injustice and so you can forgive your mother.  As a final point, the Borderline diagnosis suggests that your mother does have awareness at least to a degree of her actions (“borderline” means that she sometimes is rational and sometimes not) and so she may be aware at least at times of the impact of her actions on you.  If this is the case, then she may (at times) be intentional in her stealing behavior.  You should go ahead and forgive if you are ready.