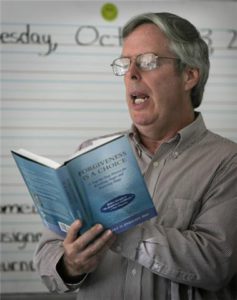 Nelson Mandela and the Power of Forgiveness

The Center for Multicultural Education at the University of Northern Iowa (Cedar Falls, Iowa), hosted a “Nelson Mandela Tribute” on Dec. 9. One of the speakers at the Tribute was Suzanne Freedman, Ph.D., Professor of Educational Psychology and Foundations at UNI. Here is an excerpt from her presentation:

Nelson Mandela was not full of rage and violence when released from prison after 27 years. He developed a vision while in prison, a vision that we are all in this together and that violence is not the solution.  He showed the people in his country and the world that revenge is not the answer to years of injustice and mistreatment.  He showed generosity and mercy when he could have shown revenge and bitterness. He decided not to avenge himself on those who treated him with such cruelty.

He transformed in prison and realized the humanity in all people, even those he fought against. He stood against apartheid and managed to change a nation without violence and hatred. His actions demonstrated great strength and courage as well as moral principles. He was able to sit down with his enemies and plan a better future for South Africa. He is said to have saved South Africa from civil war and lead a nation to democracy.

Nelson Mandela’s actions showed his people that forgiveness was possible and as a result, gave the people in South Africa hope for a better future.

Read Dr. Freedman’s full presentation Nelson Mandela and the Power of Forgiveness. Dr. Freedman is a Contributing Writer and Researcher for the International Forgiveness Institute.

Unless we eliminate the anger in the hearts of those who bully, we will not eliminate bullying.

It is our contention that bullying starts from within, as anger, and comes out as displaced anger onto the victim. Our new Anti-Bullying Forgiveness Program targets this anger and then reduces it, thus reducing or eliminating the displaced anger which comes out as bullying.