I have a friend who has been deeply hurt in a family situation.  She keeps telling me that she can lead a perfectly healthy and happy life even if she puts forgiveness aside.  Is she correct?

She is correct if she truly can live a healthy and happy life without forgiving in the face of grave injustices.  A problem with ascertaining a healthy life is this: Ill health does not necessarily come on quickly.  Instead, in many cases, resentment can chip away at health such as poor eating habits that eventually take their toll on the body, or reduced energy that eventually leads to being out of shape physically.  Thus, people saying that they are healthy without forgiving is not so easy to discern.  With regard to happiness, she will see as she continues in life whether or not she has joy.  If she does, and finds this without forgiving, then she is correct.  If, on the other hand, she concludes that she is not joyous, then perhaps it is time to at least consider forgiving as an option.

Can you help me understand how to release a relationship as part of the forgiveness process? Choosing to erect an emotional boundary feels like a form of punishment, but there is logic in it too if the offender hasn’t taken responsibility for the hurt and is likely to offend again. When is releasing a relationship the best option, and how do you do it lovingly? Thank you.

The key here is to distinguish forgiving and reconciling. If the other refuses to change and is hurtful, then it may not be wise to continue a relationship. At the same time, you can see the person’s inherent worth and forgive.  Sometimes, even when we offer our best to another, the person rejects our love. We still can forgive and then go in peace.

The Gazette, Colorado Springs, CO – An American survivor of two terrorist attacks has a message for the assailants: “I forgive you.”

Mason Wells, a 20-year-old missionary from Sandy, Utah, was a short distance from one of the two bombs that exploded near the finish line of the Boston Marathon in 2013, killing three spectators and wounding 260 others. Neither he nor his mother, who was running in the race, was injured.

Three years later, Wells was only 10 feet from the first bomb to explode at the Zaventem International Airport in Brussels, Belgium during a terrorist attack that killed 32 people and injured about 260 others. Wells suffered extensive burns to his face and hands, shrapnel wounds to his head, and blast wounds to his lower legs.

Yesterday, Dec. 15, 2017, Wells delivered a powerful message to the terrorists in an op-ed video he recorded for the New York-based media company Mic. Addressing the Belgium attackers, Wells said: 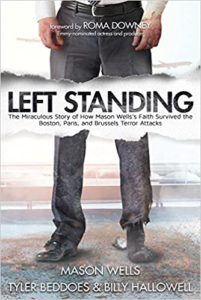 “What you did was evil. You killed innocent people and meaningful lives.

I still carry scars from that day, but I have chosen to forgive you. I have learned that the decision to forgive is ours and ours alone.

By forgiving you and getting past the events of that day, I’ve become a stronger person. It’s about letting go of yesterday and not letting the hardest moments of our lives define us. I want you to know that good has come in the wake of your evil acts.”

Wells recently wrote a book, Left Standing, about his ordeal. In it, he outlines how he learned to forgive the Brussels attackers for their atrocities. He’s now enrolled at the U.S. Naval Academy, where he’s studying engineering.

Mirror, London, United Kingdom – Actor Kelsey Grammer’s younger sister Karen was only 18-years-old when she was raped and murdered by a serial killer in 1976. Although

Grammer has carried that tragic loss in his heart for more than 40 years, he says that forgiveness is the only thing that has kept the horrific crime from destroying his life.

The much-loved star, who is best known for playing Dr Frasier Crane in television sitcoms Frasier and its predecessor Cheers, was the one who had to identify Karen’s body after her death. He said that, while he will always remember the “joy” of knowing her, he would not “let it disrupt me or destroy me.”

“As long as I’m alive I will miss her, and that’s just the way it is. So you carry that,” Grammer said. “I think you always carry it, because what you miss about them, is them in your life.”

Grammer added that forgiveness was a process that didn’t happen quickly for him and that it works together with justice.

“I’ve learned to forgive. I’ve even told the guy that is still alive that killed her that I do forgive him, although I don’t advocate for his freedom, I

The actor, now 62, is currently starring in Big Fish The Musical at The Other Palace Theatre in London’s West End. He played Dr Frasier Crane for 20 years across the two TV comedy shows for which he won four Emmy Awards and two Golden Globes as a lead actor.#

Read more: “Kelsey Grammer ‘forgives’ serial killer who raped and murdered sister but wants him to stay in jail”

Watch outtakes or the entire production of Big Fish The Musical or listen to the Big Fish Soundtrack.

From Reader’s Digest: 12 Proven Steps to Truly Forgive Anyone for Anything

Juliana LaBianca is a

prolific Reader’s Digest writer who conducted an extensive interview with Dr. Robert Enright, founder of the International Forgiveness Institute, for an article in the current online issue: “12 Proven Steps to Truly Forgive Anyone for Anything.”

“Robert Enright, PhD, is a pioneer in the scientific study of forgiveness,” LaBianca outlines in the prelude to her article.  “Here, he breaks down his four-phase model that has helped countless patients overcome anxiety, depression, and resentment, by allowing them to truly forgive.”

While forgiving will indeed require some effort, you don’t need a mental health professional to lead you down the path of forgiveness, according to the article. It’s something you can achieve on your own, as long as you know which steps to take.

Here are the 12 forgiveness process steps LaBianca explains in her article:

“When we’ve been treated deeply unfairly by others, we should have the tools to deal with that so the effects of that injustice don’t take hold in an unhealthy way,” says Dr. Enright. Following the forgiveness process steps will provide you with those tools.