I hear a popular expression these days that is called “ghosting.”  I am not exactly sure what that means, but I suspect it refers to someone who is just not there for you.  I have such an issue now with a partner, who is quickly acting as if he wants to be my ex-partner.  Can you help me understand this issue of “ghosting”?

Yes, as is the case with a recent question to me about the family as a forgiving community, I have written an essay at the Psychology Today website on the issue of ghosting and forgiveness here:

Shedding Light on “The Dark Side of Forgiveness”

On December 16 this year, I had an interview with Justin Ballis, writer for the London-based magazine, What the Doctors Don’t Tell You, that aims to provide evidence-based holistic solutions to illness. Mr. Ballis was one of the most informed interviewers on the topic of forgiveness whom I have ever encountered. The interview covered an impressively wide range of topics on forgiveness, one of which centered on criticisms leveled against the practice of forgiving those who hurt us. In his researching the skeptical views, Mr. Ballis came across a journal article on “the dark side of forgiveness” by Dr. James K. McNulty:

McNulty, J.K. (2011). The dark side of forgiveness: The tendency to forgive predicts continued psychological and physical aggression in marriage. Personality and Social Psychology Bulletin, 37, 770-783.

This discussion with Mr. Ballis got me thinking: If well-informed journalists are aware of Dr. McNulty’s article, then it is important to have a thoroughgoing critique of that work, which is flawed in many ways. So, with this in mind, here is an excerpt (chapter 14) from my book with Dr. Richard Fitzgibbons, Forgiveness Therapy (American Psychological Association, 2015), in which we examine the science behind this work:

McNulty (2011) claimed to have found scientific support for the view that forgiving within marriage perpetuates injustice. Seventy-two first-married couples took part in a survey in which they responded to hypothetical

situations regarding forgiveness. For example, one of the partners asks the other to mail a very important package which the other partner then forgets to do. On a 1-to-7 scale, the respondent reports the degree of forgiveness that he or she would offer to the forgetful spouse.  We have four criticisms of the study’s conclusions: a) The questionnaire was very short (five items); b) the questions were all hypothetical and not actual situations in the marriage; c) only one of the hypothetical scenarios is actually serious (an alleged affair), and d) the questionnaire simply asks the participant if he/she would forgive without ever defining the term. The forgetful spouse who failed to mail the package did not act with intent to harm. The one choosing to have an affair did. In other words, some respondents may be confusing genuine forgiveness with excusing or “letting go.”  This is a serious flaw to the work (failing to distinguish related but quite different terms) that could have been overcome by asking people what they mean when they use the word forgiveness. The findings could reflect this: Those who score high on this scale are doing the most excusing or condoning, which could make them vulnerable to further abuse. In other words, those who excuse may not seek a proper justice solution upon “forgiving.”

So, there is our critique. My conclusion? It is this: If there is a “dark side” to forgiveness, the above study is not the one to show it.

Among Hopes for the New Year: FORGIVENESS

Editor’s Note: This Guest Blog was written by Roberta Baumann, Managing Editor of the Waunakee (WI) Tribune, and originally appeared in that newspaper on Dec. 31, 2020.

This past year has been so difficult that perhaps, more than any other time, we’re all looking forward to its end, to starting 2021, a year filled with hope.

With the promise of a vaccine and an end to the pandemic, we hope our lives will return to normal, we can send children back to school in person, and our economy can begin to recover.

In some ways, rather than bringing us together, COVID-19 has rendered deep divisions. Another hope for 2021 is forgiveness.

Several years ago, University of Wisconsin social sciences professor Robert Enright spoke about this topic at a Waunakee Rotary meeting. With his examples of remarkable acts of forgiveness — cases in which a rape victim forgave the rapist, and individuals from war torn countries made peace with those who killed their loved ones — his talk was unforgettable. 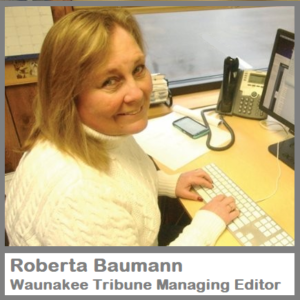 Forgiveness is not the same as forgetting. It requires empathy, recognizing the person behind the act. And it does not benefit that person who has done harm. Instead, it benefits the one holding the grudge.

Holding onto anger increases stress and anxiety, and neither is healthy emotionally or physically. Experts say forgiveness can result in lowered blood pressure, improved mental health and even a stronger immune system. We all know how important a strong immune system is right now.

Also, when we carry that resentment, it can spill over and affect our relationships with others. When we bring it home and say, yell at the dog, we just create stress in our families’ lives and feel worse.

Forgiveness starts with recounting the wrong you feel has been done, trying to understand the reasons behind it, and then moving on. For some, meditation or prayer helps with this process.

One article from the Mayo Clinic suggests, “Move away from your role as victim and release the control and power the offending person and situation have had in your life.”

Forgiveness is not always one-and-done; anger can resurface, and the process can start all over again.

Forgiveness also differs from reconciliation. In some cases, the person who has done harm feels no remorse or takes no responsibility. Yet essentially, it’s not about the wrongdoer, but the person who feels resentment and how harboring that feeling affects them.

As we look ahead to a year full of hope, let’s do so in a way that brings greater unity and peace. We are all stronger together as a community and a nation, and we will soon face the task of healing and rebuilding from the tremendous losses we’ve faced in 2020.

“I wrote this piece during what may have been the darkest time of the COVID-19 pandemic,” Baumann says. “In retrospect, I believe isolation and fear gave rise to anger — a much more empowering feeling — among many in the Waunakee community. My hope was that in 2021, divisions in the community could begin to heal.”

An award-winning writer, Baumann has been the Managing Editor of the Waunakee Tribune for 26 years. She graduated from Iowa State University with a master’s degree in English. Waunakee is a village of 15,000 residents just outside Madison, WI.