Mother of Amish Schoolhouse Shooter: “We are Called to Forgive”

The Huffington Post – Religion, Lancaster, PA – The mother of the gunman who killed five girls at an Amish schoolhouse in Pennsylvania says she learned from the Amish how to forgive her son after the 2006 massacre.

Just over seven years ago, Charles Carl Roberts IV barricaded himself inside an Amish schoolhouse in Nickel Mines, PA, tied up 10 girls and opened fire, killing five and injuring five others before committing suicide as police closed in.

The Amish responded by offering immediate forgiveness to the killer — even attending his funeral — and embracing his family.

Roberts’ mother, Terri Roberts, could have gone into hiding to nurse her pain, like many parents of mass murderers have in the past. Instead, she broke with convention. She forgave, too, and now she is sharing her experience with others, saying the world needs more stories about the power of forgiveness and the importance of seeking joy through adversity.

“I realized if I didn’t forgive him, I would have the same hole in my heart that he had. And a root of bitterness never brings peace to anyone,” Roberts said. “We are called to forgive.”

Roberts has delivered that message to scores of audiences, from church groups to colleges, and is writing a memoir. At the same time, she stays close to her Amish neighbors.

Once a week, Terri Roberts spends time with a 13-year-old Amish girl named Rosanna who sits in a wheelchair and eats through a tube. Roberts bathes her, sings to her, reads stories. She can only guess what’s going on inside Rosanna King’s mind because the girl can’t talk. Roberts’ son did this to her. She is one of the five schoolhouse shooting survivors.

Terri Roberts’ weekly visits with Rosanna force her to confront the

damage her son caused. But Roberts says she also finds peace as she spends time with Rosanna and provides some relief to the teen’s family, if only for a few hours.

While the Amish were celebrated for how they responded to the massacre, they also acknowledge that forgiveness doesn’t always come easily or automatically. Rosanna ‘s father, Christ King, said the Amish are like anyone else, with the same frailties and emotions.

“We hope that we have forgiven, but there actually are times that we struggle with that, and I have to ask myself, ‘Have I really forgiven?'” King said. “We have a lot of work to do to live up to what we are bragged up to be.”

Yet Terri Roberts says she learned from the Amish that “none of us needs to live in the saddest part of our lives 24/7.”

I am a very reserved person, kind of shy actually. I need to ask someone to forgive me, but I just can’t bring myself to do it. Do you have any suggestions for me so that I can get this done?

You already are showing courage in wanting to ask for forgiveness.  So, please be aware of that.  You do not have to ask face-to-face.  Have you thought about starting with a mailed letter or email?  In this way, you have the opportunity to write out what you did, why you think it was unfair, and your awareness of its effects on the person.  You can then write out the apology and ask for forgiveness.

I have forgiven a friend for rude, inappropriate behavior a couple of times and he keeps at the rudeness. I am beginning to wonder if he sees my forgiveness as weakness. Should I hold back on forgiving the next time so that he gets a different message—that I really mean it when I want him to stop the rude, mean ways?

I think the issue here is reconciliation rather than forgiveness.  You can forgive from the heart and then, with your anger diminished, ask for fairness from the other person.  As you stand firm in the request for justice, you are giving the kind of message that I think is your intention, that the behavior is inappropriate.  So, consider forgiving as soon as you sense anger arising in you from the injustice.  Then have reconciliation in mind by pointing out the behavior that you would like to see him change so that you can again come together in mutual trust.

Yet, we have found a hidden way to reverse the trend in those who are so hurting that they derive pain from hurting others.  It is this:  Ask the hurting students, those labeled so often as bullies, to 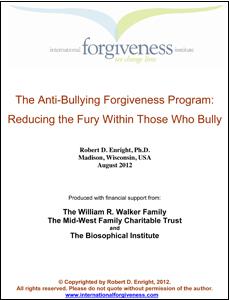 tell their story of pain, their story of how others have abused them.  You will see this as the rule rather than the exception: Those who inflict pain over and over have stories of abuse toward them that would make you weep.  In fact, we have seen the weeping come from the one who has bullied others, the one who has inflicted serious pain onto others.  He wept because, as he put it, “No one ever asked me for my story before.”  His story was one of cruel child abuse from an alcoholic father who bruised him until he bled.  And no one ever asked him about this.  And so he struck out at others.  Once he told his story, he began to forgive his father and his pain lessened and thus his need to inflict pain on others slowly melted away.

BBC News UK, London – A rape victim who met her attacker in prison in order to tell him she has forgiven him called the visit a “great” experience to seek “peace and forgiveness together.”

London resident Katja Rosenberg, 40, was cycling home after work when she was attacked by a 16-year-old stranger. He was eventually captured and jailed for 14 years after admitting to that attack and another rape of a 51-year-old woman shortly afterwards.

Rosenberg said she felt she could forgive soon after the 2006 rape, believing things must have gone wrong in her attacker’s life. “You wouldn’t ever do that if you felt happy,” she told BBC Radio 5 live.

Rosenberg said she had always felt in the years since that she should meet her attacker. She finally visited him in prison last September–a meeting arranged through a restorative justice program.  Rosenberg said she was partly motivated by a wish to assure her attacker that “life’s not hopeless, that he knows he’s got a future”, she said.

“I just felt I could give that. I also thought the exchange would be good for me to somehow get some kind of closure – I mean, I didn’t really need a ‘Sorry’, but it was somehow just good to see that you walk into the same direction of peace and forgiveness together.”