April 30, 2022 directorifi No comments
The first-ever meta-analysis of classroom Forgiveness Education programs, a study involving nearly 1,500 grade school students in 10 countries, has determined that such programs “effectively decrease anger and increase forgiveness among children and adolescents. In addition, results indicated that forgiveness education interventions have robust effects that remain even after the termination of the program.”
. 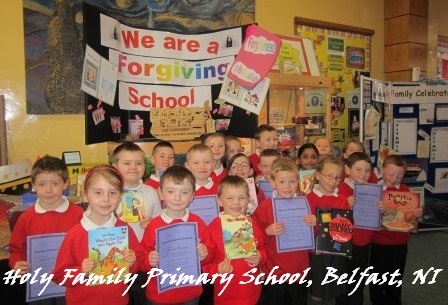 The research, “A meta‐analysis of forgiveness education interventions’ effects on forgiveness and anger in children and adolescents,” was conducted by University of Wisconsin-Madison researchers Hannah Rapp and Jiahe Wang Xu (both graduate students in the Dept. of Educational Psychology), and Dr. Robert Enright, educational psychology professor and co-founder of the International Forgiveness Institute (IFI).

Other significant observations and findings in the just-published report include:

1 Child Development is a 92-year-old bimonthly scientific journal published by the Society for Research in Child Development (SRCD). It is a vital source of information not only for researchers and theoreticians, but for a broad range of psychiatrists and psychologists, educators, and social workers in more than 60 countries around the world.

2 The Forgiveness Education curricula developed by Dr. Enright and the IFI for pre-k through 12th grade students is based on children’s story books. Those stories teach about forgiveness and other moral virtues and equip children with the knowledge of how to forgive a specific person who offends if they choose to do so. Lessons begin by educating participants about the five concepts that underlay forgiveness: inherent worth, kindness, respect, generosity, and agape love. During the program, participants read and discuss several age and culture-appropriate stories that display forgiveness between characters such as in The Tale of Despereaux by Kate DiCamillo and in Horton Hears a Who! by Dr. Seuss.

In 2002, Dr. Enright initiated a forgiveness education program in Belfast, Northern Ireland that has now been in operation for 20 consecutive years. His Belfast work is featured in the award-winning documentary The Power of Forgiveness. Dr. Enright started similar programs in Liberia, West Africa in 2011 and in Israel-Palestine in 2013. He now has such programs in more than 30 contentious regions around the world and an IFI Branch Office in Pakistan at the Government College University Lahore (GCU-Lahore, Pakistan).

I think it is so important to foster forgiveness in families.  Children need to learn to forgive.  What advice can you give to parents for this?

Yes, I agree that it is of vital importance that this happen so that we can fortify children against the injustices that likely will occur when they are adults.  Knowing how to forgive can be a protection against the build-up of unhealthy anger.  Here is a link to one of my essays on the Psychology Today website that gives details on how a family can become a forgiving community:

Is Your Family a Forgiving Community?

Is forgiveness the same thing in all cultures and times?

We talk about forgiveness as if it has universal meaning, but should we be talking about early 21st Century forgiveness in Western cultures, rather than a generic “forgiveness?” Should we presume that forgiveness is not the same everywhere and across all time of human history?

Although there are wide cultural and religious differences among the Hawaiian family ritual of Ho-O-Pono-Pono, the discipline of forgiveness in the Jewish customs of Yom Kipper, and the sacrament of Penance within Catholicism, this does not mean that each is dissimilar at the core. The behaviors manifested in these three kinds of forgiveness differ, but all three are concerned about confronting injustice with love. All three acknowledge that there is right and wrong; all three acknowledge resentment or some kind of moral response to wrong; and all three see forgiveness as a merciful response of goodness toward the offender(s). At their core, these three seemingly disparate cultures and/or religions share much in common.

Across time, we have ancient stories of forgiveness that do not differ from the present day. In Hebrew writings, there is Joseph forgiving his brothers, and we see an unconditional, merciful response to their injustices against him. In Christian scripture, there is the father of the prodigal son offering him acceptance and love in the face of injustice. In Muslim writings there is a parallel story to Joseph, also showing mercy in the face of wrongdoing. Hindu, Buddhist, Confucian, and other ancient literature are more alike than different in describing what forgiveness is. The preserved meaning has not changed to this day.

Is forgiveness the same thing in all cultures and times? Despite wide cultural nuances, it appears to be so.