How to Like Yourself After a Series of Failed Relationships

Training the mind to see one’s own inherent worth can  go a long way in recovery.

So often, I see that people, who have done their best in a failed  relationship,  fall in self-esteem. The person might have tried hard, wanted to maintain the connection, and yet it did not work out.  Despite the best of intentions, the one left behind ends up not liking……..oneself.

You would think it would be the other way around. The one who walked away or behaved badly should be on the receiving end of the dislike. Yet, it is so often toward the self that the negativism is most deeply directed.

I have six suggestions for you as a way of resurrecting a positive self-image after relationships fail:

Third, if you tried your best, then realize that you are not to blame for another’s difficulties or weaknesses. The other is free to make misfortunate decisions, even if these decisions hurt both of you. 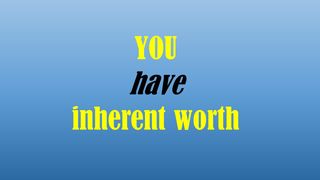 Fourth, try to practice toward yourself the idea of inherent worth. You have value, inestimable value, as a person because you are special, unique, and irreplaceable in this world. This worth is unconditional, not earned as some kind of reward for good behavior.

A strictly biological perspective can show you this. For example, you have unique DNA so that when your time in this world is through, there never will be another person exactly like you on this earth……ever. You are…..special…..unique…..and irreplaceable. People with certain religious viewpoints can go beyond the biological to the transcendent and say, “God loves me” or “I am made in the image and likeness of God.” In other words, you are…..special……unique……and irreplaceable.

Fifth, begin to practice this idea that you have inherent or built-in worth. You can do this by extending this knowledge to others first and then to you. For example, as you pass people on the street, you can think: “This person has built-in worth that cannot be earned. That person over there may have weaknesses, but this does not detract from

having worth. I, too, share this in common with them. I, too, have inherent worth.”

Sixth and finally, once you have strengthened the idea that you are a person of inherent worth, then apply that knowledge to yourself in the context of the past relationship(s): Despite the fact that this failed, I have worth. I am not defined by the success or failure of a relationship. I am more than that relationship. I will continue to be special, unique, and irreplaceable regardless of that outcome.

Be aware that you want to keep such thoughts in balance so that you do not degenerate into narcissism.  The point of growing in the knowledge of inherent worth is not to puff yourself up relative to others.  In fact, a clear understanding of inherent worth should be a guard against narcissism. Why? It is because the idea of inherent worth levels the playing field of life. If we all have inherent worth, then all of us have value, even if some make more money or have more talent or whatever separates us. We are united in this: We all are special, unique, and irreplaceable.

As one more caution, avoid using the thought of inherent worth to perpetuate nonsense. For example, suppose you have a gambling habit that seriously depletes the family’s funds. You do not then want to proclaim your inherent worth to yourself so that you can continue the nonsense. Yes, we all may have inherent worth, but we all are imperfect and need to work on our character flaws as we retain that sense of worth.

of us. We possess a worth that is unconditional. No one can take that away from us, even those who walk away from a relationship that could have been great for both of you. Hold out the hope that the next person also sees inherent worth in those with whom there is a committed relationship. One of the best ways to have a stable ongoing relationship, it seems to me, is to find a like-minded person who understands the importance of inherent worth and sees this very clearly in the self and in you.

This blog was originally posted on the Psychology Today website on Nov. 8, 2018.